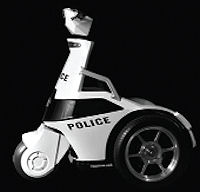 Having lived in Washington, D.C., a decade ago, I still pride myself in the ability to navigate my way from the metro to the monuments to the museums. The city, steeped in history and civic pride, was the perfect place to escape to for the Fourth of July weekend. I expected to see great presidential history and amazing brick-lined architecture in my three-day race around the city.

But I didn’t expect to see so many hallmarks of Orange County around the National Mall (for those who haven’t been to our nation’s capital, the National Mall is not a big shopping center, but a Central Park-type area ringed by museums).

The museum row was patrolled by guards on T3s—souped-up Segway-style vehicles made by Costa Mesa-based T3 Motion Inc. The three-wheeled scooters seemed much more secure than the line of Segways carting tourists through the 2-mile stretch of the National Mall.

Being summer break, there were throngs of school-aged kids touring the monuments—some in mandatory dress clothes and heels and others sporting a variety of OC-based designers, most notably Costa Mesa’s Rvca Clothing, which is being bought by Irvine-based clothing maker Billabong USA.

My main goal during the trip was to visit the new Newseum, dedicated to all things journalistic. The six-floor glass structure is designed like a boxier Guggenheim and made to be enjoyed from the top down. After a look at a re-creation of Tim Russert’s office, a montage of Sept. 11 coverage and a hands-on exhibit that reminded why me I didn’t choose to be an on-camera reporter, I came down to a heartwrenching exhibit of Pulitzer Prize-winning photographs from the past 50 years. And there on a plaque next to a photo of U.S. Olympic swimmer Rowdy Gaines being greeted by fans against a giant flag was a credit to the Orange County Register.

I’m used to seeing decisions made in Washington trickling down to OC, but it’s nice to see how much businesses and residents here are affecting the capital as well.